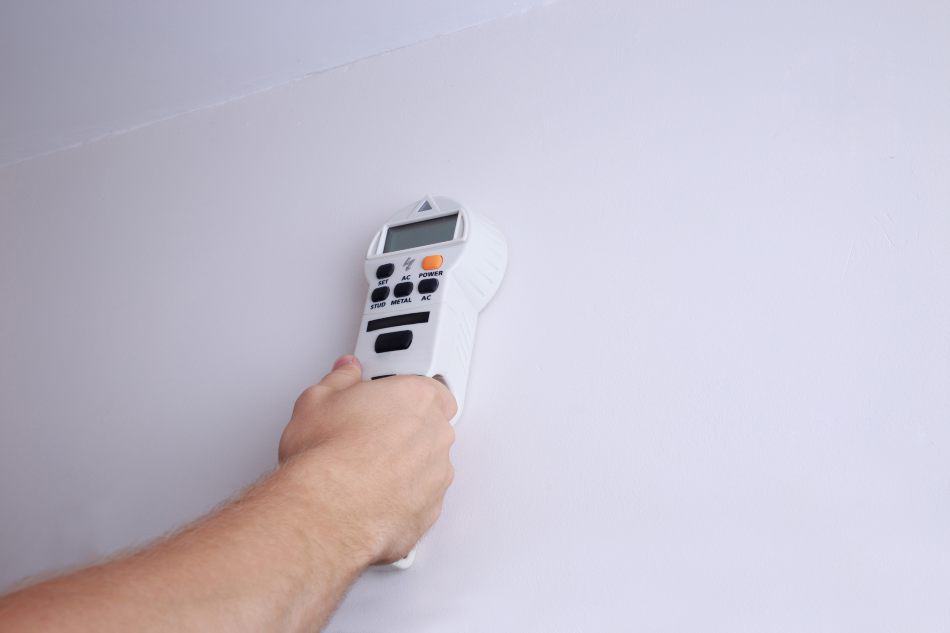 … That’s why, I’ve decided to breakdown the best Stud Finders in the market today.

Bosh Digital Multi-Scanner (Check it Here on Amazon) is a very decent stud finder that can help you detect the wood, metals and live wire.

You won’t need to break the bank to buy this scanner.

When you pass the scanner on the wall, you get a green color to indicate the presence of wood, metal, or live wire. There is an audible tone that is produced to give you an alert. It gives you the precise location of the studs inside the wall.

The range of the multi-scanner from where you can scan is really impressive. You can detect the studs that are in-depth of 4 inches. It gives you the strength of the signal along with its depth.

You can calibrate this tool to find the material with ease. It runs with the help of a battery. It can be operated in three different modes. The results that you get using the stud finder are accurate when you use this device on the smooth or uneven surfaces.

This digital multi-scanner is also known as a center finder that produces the signals when it detects something with an audible tone. You can choose any of the three models to operate and find live ac wires, wood, or metal. The LCD-display on the scanner would indicate the detection, strength, and mode at which the stud scanner is operated.

There is also a detection ring that will indicate red color when it detects something within a shorter range of it. It turns orange when it detects the studs or objects closer to it and shows green when nothing is found. It gives accurate and useful results.

It allows you to detect metal and wood objects in the drywall. When you want to operate the drywall mode, you must press the “10” button on the scanner. You cannot wholly rely on this to detect the live wires that are hidden inside the plaster surfaces.

Professionals and DIY users can use it. It is sturdy and lightweight.

This is another decent model (Check it Here on Amazon) that it can detect studs, joints, live wire, and also moisture with ease and precision.

It runs with the AAA batteries that have good battery life. With a single charge, you can use the tool for a long time. If you are annoyed with the sound produced by the tool when detecting some stud or live wire, you can mute the sound and depend on the LCD screen.

It is really useful while doing the home renovation work!

You can run this in different modes such as wood stud deep mode, metal objects mode (to detect iron and non-iron materials, copper conductors mode (live wires), and moisture in the wood building.

When the scanner is nearing to the stud’s place, the signal strength improves, and a sound is produced. You can see the + icon when it is in the center, and the strength of the signal would be shown as 100 on the screen.

Other studs finders make you look twice to find the edge of the studs. It can detect the metal, live wires, and wood in ceiling, walls, and floors. When you operate the tool in the wood exact mode, it scans up to a single layer of the wall.

If you are operating it in the deep scan mode, it scans up to 2 layers of the drywall. The deep stud mode is used when you want to scan in the wallboard that has many layers.

The Welquic Electric Center (Check it Here on Amazon) is known for being auto-calibrated. Indeed, it is ready to be used without any prior settings. It can detect the live wires that are up to the depth of 76 mm.

It can also detect the metal studs and wood studs up to 38 mm. The best part of this finder is that professional and DIY users can use it. Whatever you can, it is visible on the LCD screen.

It produces a visual and audio warning. When it locates the stud in the wall, it gives a beep alert.

The soft grip allows you to use it comfortably for a long time. It offers an excellent grip to hold rigidly without dropping it down. It saves a lot of power as it turns off when it is not in use automatically.

The electronic stud locator allows you to operate in three different modes, such as stud scan, metal scan, and live wire scan.

It works with the 9-volt battery that lasts longer with a single charge.

You can visually and audibly be aware of the precise location of the stud. You can mark those areas and avoid touching them while carrying out drilling in the home during a renovation.

Is a Stud Finder an Actual Metal Detector?

The stud finder can be used to detect the metals inside the wall. There is a minute difference between stud finder and a metal detector.

Indeed, it also detects the wood, beam, electrical lines, metal, and studs in the ceiling, floors, and walls.

The metal detector can only detect metal objects.

Can I use my phone as a Stud Finder?

Yes, you can turn your mobile phone as a stud finder!

There are many stud finder applications available on the Play store. You can download the app and use it as a stud finder.

The application you down will make use of the mobile magnetometer to point out the screws, nails, wood studs inside the wall.

When you detect the studs, you can avoid drilling at those places and nail in a safe place to hang the picture, TV, or a wall fixture.

Yes. It can detect the wood. There are different modes in which the stud finder operators. You can turn to the wood scan mode to scan the wall, ceiling, or floor for wood.

It is the best tool that can be used by the carpenters to scan for wood inside the wall. It is comfortable to use and reduces the work of the carpenters in detecting the finding.

Yes, the stud finder can detect the water lines (water pipes) behind the plasterboards with the help of the sensors.

When you place the stud finder on the wall and press the button to start functioning, you must keep sliding the finder in one director to see the glowing light and a beep alert.

Many stud finders can locate the pipes or electrical cables.

Can You Find a Stud Without a Detector?

All homeowners can’t own a stud finder for their home projects. There are a few ways to locate the stud:

Really hope this short Post as given you clear idea on what machine you should opt for!

As you can see, I’ve included some common questions that people ask, hopefully you’ve found that useful.

Have a nice day.