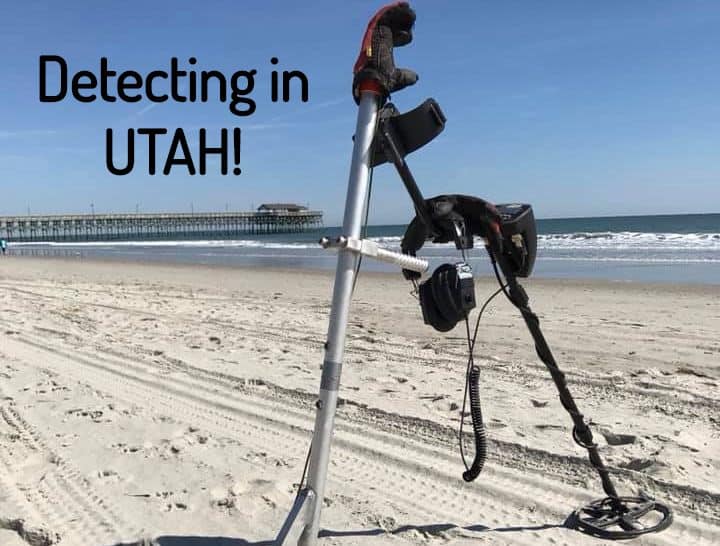 Utah, known for its high quality snow and beautiful Parks, is a very good place for detection hobbyists! In fact, despite its tough climate, especially in the winter, chances are you should be able to come up with some good finds …

… Nevertheless, I wouldn’t sleep on the legal aspect, so you should do I guess, as this might put you easily in trouble if you are violating the regulating rules for the state!

… In this article, I give in-depth info about these topics:

As well as more helpful info that you should know about …

What are the metal detecting laws in Utah?

The Antiquity Act Law of 1906 governs the hobby in Utah! This law was established for the protection of the artifacts ad heritage of Native American Indians in the country. However, over the years, the law has started including any item that is considered to be 100 years old or even older.

Furthermore, detection activities in there is also governed by the National Historic Preservation Act (NHPA). Indeed, it is illegal to detect in a National Park or at a National Monument …

… It is also unlawful to detect on land under the Bureau of Reclamation Lands and Water Ways! In fact, the hobby is not very welcomed at the State Parks of Utah…

… The confusing rules and laws make it difficult for detectorists to get a permit that allows practicing the hobby in the state parks. Due to this, it is best if you contact the park you want to visit and find out their specific rules …

… Because not many people are doing so, chances are, you will end up getting permit!

Where to go detecting in Utah?

From rugged red rocks to alpine lakes, Utah is a popular destination not just for tourists, but also for detectorists from all over the country.

The state claims that it has ‘something for everyone’ and with five national parks, 45 State Parks, five historic sites and trails, and the many national monuments and recreation areas, Utah is a paradise for hobbyists from around the world!.

Some of the best and most interesting places that you can explore in there are as follows:

A Decent Detector for this State Soil!

Utah has an official state soil known as Mivida! Mivida soil is a deep and well-drained soil that is formed in wind-blown sediments as well as local alluvium that is primarily derived from sandstone…

.. In such soil type, the Fisher 22 weatherproof (Check it Here on Amazon!) is the one of the best picks, especially for those who are on a budget!

This device allows you to search for treasure through sun, snow, hail, or even bogs. It is built to handle all types of environment, which is precisely what you need for the landscape of Utah.

The device is weatherproof and has a fully submersible search coil. This allows you to detect underwater as well.

It also comes with a handy LED screen, which provides you all the information you need and also points you in the right direction. The handle and arm brace of the detector is comfortable and easy to use, allowing you to continue searching for many hours. The discrimination system of the device also ensures that you are not wasting your time detecting trash.

However, if you have no problem investing in a professional machine, then you may want to Check my Favorite Detector Here on Amazon! It brings some serious new technology to the table which I personally appreciate …

There are no laws that govern detection activities on the beaches in Utah (at the best of my knowledge). The state is known for its hot summers, and detecting on its beaches is a great way to beat the heat as well as indulge in your favorite activity.

Some of the best beaches that you may want to explore are:

Utah sees many gold prospectors in the state and for a good reason. While it is one of the poorer states in the Western United States when it comes to gold prospecting, but there is still enough gold there.

Four rivers in Utah are known for the occurrence of gold. Gold mining used to take place here in the 1800s and again later in the 1920s and 1930s.

The rivers where you can expect to find gold is:

If you are curious about this topic and want to learn more about it … I’ve spent several days writing this Gold Digging and Prospecting Article! I am sure that you will learn helpful stuff you didn’t know about before …

There are wonderful opportunities to find coins and relics with your machine in there! Even modern-day jewelry is a common find in Utah. There are tons of lost treasure that is believed to be buried throughout the state. Some of the famous ones include:

Coins, earrings, rings, and many other forms of valuable jewelry is also some of the common finds in Utah.

Metal detecting is a popular activity in Utah, and as a result, there are many clubs in there! Here are some of the popular ones in the state and that you may want to join:

Getting your Permit to Detect in Utah!

For this part I lack in terms of data! Yet, I will list the info I am already aware of … Hopefully this could serve you well …

… Indeed, to detect in State or National Parks in Utah, you need to get a written permit from the park superintendent!

Apart from this, there is no need (at the best of my knowledge) to obtain a permit for detecting in there as it is considered to be a legal activity in most cases!

If you’ve already got into this hobby and are living in or close to Utah or you have the intention to go there spend some time, then, you really need to realize that this states hold significant detection opportunities that you really should take advantage of …

… If you’ve been there, don’t forget to come back and drop a comment describing your experience, this will be very helpful for other hobbyists like you!